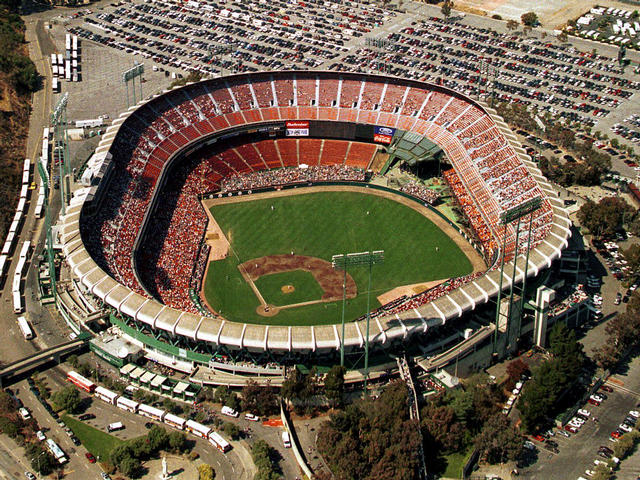 ARE YOU READY FOR BECHTEL PARK? How about Halliburton Stadium, or Monsanto Field?

ONE OF THE MORE IRRITATING governmental practices to emerge in the late 20th Century was the selling of naming rights to public spaces and assets. Driven by the need to raise dollars in difficult budget years, cities around the country are now competing to attract corporate buyers. Supporters acknowledge it’s unseemly, but say, “What the hell, everybody else is doing it.” As a result we’ve ended up with sports arenas and stadiums named in honor of various corporations rather than famous athletes who played there, or exceptional coaches, or even philanthropists who helped fund construction. We’ve done this ostensibly to address budgetary problems and provide services for those in need. Yet ironically the selling of naming rights doesn’t fix budgetary woes. Usually, it delays the true structural reforms that are needed to sustain a city. Rather than sell naming rights to corporations, government ought to make the hard choices necessary to be able to function within budgetary constraints.

The Enron Field embarrassment, where fraudulent accounting practices lead the company to bankruptcy and thousands to lose their jobs and pensions, did not just affect the City of Houston, it caused a reevaluation of what had become a common practice. Two years ago, San Francisco became the first American city to reverse the trend by restoring the name of Candlestick Park after the city’s lease with 3Com expired. The ’Stick, as it is affectionately known, was built entirely with public monies and is the home of the San Francisco 49ers. Its name derives from Candlestick Point and the cove that it embraces, which was once the home to the candlestick bird, a member of the curlew family, a wading bird with long, thin legs.

At the time that the San Francisco Board of Supervisors voted to reject renaming Candlestick, various city leaders noted that what was at stake was the increasing commercialization of everyday life. City Supervisor Jake McGoldrick commented that “Selling corporate naming rights to our public space appeals to our crass materialistic instincts rather than our highest ideals embodied in sportsmanship.”

And Supervisor Tony Hall said, “Like the Golden Gate Bridge, Cable Cars, and Coit Tower, the City has a special place in its heart for tradition. The ’Stick is part of that tradition. This is a victory for the everyday citizen who let us know that some things just aren’t for sale.”

Even Ralph Nader weighed in, saying, “Tradition took a stand against raw corporate commercialism when the San Francisco Board of Supervisors voted against the sale of naming rights to Candlestick Park.”

The vote against renaming Candlestick Park again was widely supported in San Francisco, and for good reason. Many hoped it signaled a new trend towards checking the increasing commercialization of traditionally public spaces and towards recognizing the importance of cherishing historical traditions.Unfortunately, the trend may not hold. After two narrow votes by the Board of Supervisors the last couple of years, the Mayor has decided it’s time to put the ’Stick up for sale again. This time he’s recycling old arguments claiming that we need the lease money to fund needed city programs like maintenance at our parks and to keep vital social programs operating.

But if this is such a good argument, how far can we take it? Why doesn’t it apply to the sponsorship of City Council seats or to the Mayor’s office itself? Why not allow corporate sponsorships to raise money so that we can make sure poor kids can pay for school lunches? “Bank of America City Hall” has a nice ring to it; or, how about the “Bechtel Human Rights Commission”? If we’re raising money for school kids, shouldn’t that be enough of a justification?

In 2001, a San Diego Councilman wanted to sell the naming rights to the city’s 26 block downtown ballpark district (in addition to the stadium name itself). Gary Ruskin, executive director of Commercial Alert, suggested the councilman sell naming rights to his business suits to save taxpayers the money from his salary. “If he wants to inflict this indignity upon citizens of his city, shouldn’t he inflict it upon himself first? He could look like a walking NASCAR racetrack, and thus be a testimony to his own beliefs.” Ruskin challenged the councilman to “lead by example, and to turn his own wardrobe and person into an icon of aggressive commercialism.”

Elsewhere Ruskin noted that cities have to ask themselves how they feel about “promoting big polluters, corporate welfare recipients or corporate felons?” He noted that Denver’s Coors Field is named for a company that paid a $200,000 criminal fine and pleaded guilty to two criminal misdemeanor counts of contaminating groundwater and failing to report the contamination to regulatory authorities.

Unfortunately, the trend continues to gain in popularity. American Airlines Center in Dallas, Minute Maid Park in Houston, Pepsi Center in Denver, Compaq Center in San Jose, TD Waterhouse Center in Orlando, BancorpSouth Center in Tupelo, and SAVVIS Center in St. Louis are just a few examples of corporate stadium names. Even colleges and elementary school are getting in on the action. Just recently Boise State University’s sports arena announced that it will now be called “Taco Bell Arena” in exchange for $4 million from the fast-food franchise. A gym at Costello Elementary School in Brooklawn, NJ was named the “ShopRite of Brooklawn Gymnasium”.

San Francisco is among a handful of cities that are holding the line against this invasive commercialization. Lambeau Field in Green Bay (named for E.L. “Curly” Lambeau the first coach of the Packers) and Soldier Field in Chicago have held off efforts to affix corporate names to public property.

The purchasing of naming rights is just one of the many corporate practices that are increasingly compromising public life. It is now common for corporations to purchase product placement in movies and even works of fiction. That’s right. They pay to have their product “accidentally” appear in the movies you’re watching and in novels you’re reading.

There is a lack of skepticism concerning corporate power in America, and allowing corporations to appropriate such public spaces reinforces the positive impressions that these corporations untruthfully want to foster, particularly in the mind of young persons. This focus on corporations bringing us entertainment distracts us from the kind of critical inquiry our society needs. Why are corporations falsifying accounting practices to hide their true finances? Why are American corporations using harmful chemicals in the production of goods that are hazardous to human life and which poison our environment? Why do corporations go to court to protect themselves from anti-child labor laws and to avoid inspections? Why do corporations engage in union busting activity and pay such low wages? We have to ask ourselves, what role model do corporations make? Corporations are not promoting character but rather selling products. Isn’t there already enough advertising in our world to leave public structures alone?

Justifying the sale of naming rights to generate funds for park maintenance and other services masks the true cause of municipal revenue shortfalls. Namely, that corporations are increasingly paying less in taxes. As it is, it is estimated that one-third of America’s largest corporations paid no taxes at all last year. In fact, the share of tax revenue paid by corporations declined from 28% in 1956 to 12% in 1996 – a period during which they experienced record growth. Even corporate property taxes fell from 45% in 1957 to 16% in 1995. It is no wonder corporations have extra spending money with which to purchase naming rights.

Ultimately, I stand by the remarks I made two years ago when I led San Francisco’s effort to restore Candlestick Park’s name. “It is not the proper role of any city to act as an agent of public relations firms, prop up tarnished corporate identities, or otherwise become an advertising venue for corporations.”