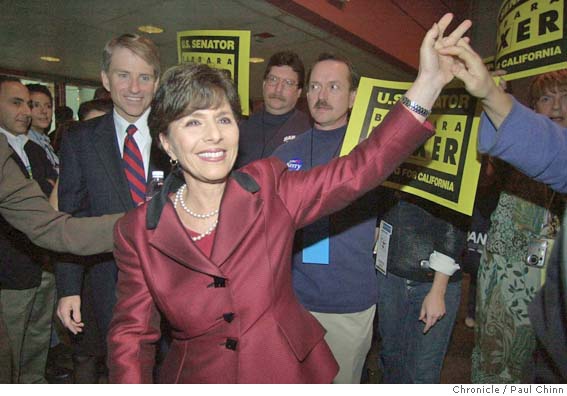 THE PROGRESSIVE COMMUNITY RECENTLY applauded Senator Barbara Boxer for the pointed questions she directed to Condoleezza Rice, President George Bush’s nominee for Secretary of State. Sen. Boxer was certainly correct to attack Rice, who as the National Security Advisor, was one of the leading proponents of the Iraqi War. Naturally, one would think that every Democratic member of the US Senate would want to grill Rice on her role in taking our country to war and her claim that the intelligence community was united in it’s conclusions about Hussein’s fictitious arsenal. But Sen. Boxer stood virtually alone.  On January 19, only Senator John Kerry of Massachusetts, joined her in the Senate Foreign Relations Committee in voting against Rice’s confirmation, and, ultimately, the Democrats could muster only 13 votes (including one Independent) in the full Senate against Rice.  This is surprising given that there are 44 Democrats in the Senate.

Progressives have been unusually united in praising Sen. Boxer for her principled stance against Rice. Many have openly expressed the wish “if only those other Democrats had voted with her.” But I want to pose these questions:  Is what Boxer did really principled?  And is she giving us a strategy for opposing the Bush Administration that can work?

Regrettably, I don’t find her actions heroic. Sen. Boxer may be the progressive darling now, but she—and other Democrats—routinely play self-preservation politics—and when they do, it’s principles be damned.

Less than six months ago, Sen. Boxer was running for reelection against former California Secretary of State Bill Jones.  During the campaign she took a number of—what can only charitably be called dubious positions, presumably to make her appear more sanguine to conservative voters. She voiced support for the death penalty, despite the overwhelming evidence of it’s disproportionate application against racial minorities and she opposed Proposition 66, a measure that would have reformed the draconian “Three Strike” law in California by requiring the third strike to be serious or violent before a life sentence could be imposed.  She even spoke out against gay marriage.

Sen. Boxer’s political posturing and repeated dismissal of progressive principles during her reelection campaign cannot be excused.  And it hasn’t just been recent.  She voted for the $80 billion supplemental appropriation to support the war in Iraq which also included monies for homeland security; three years ago she voted for the worst attack on civil liberties in over a half century, the mis-named Patriot Act; and more recently she supported a resolution condemning the decision of the International Court of Justice (ICJ), which had challenged the legality of Israel’s construction of a so-called security fence through the occupied Palestinian West Bank, and urging the United Nations to take no further action to prevent it’s construction. (The ICJ noted, among other things, that the construction of the first 125 miles of the 26 foot high barrier “involved the confiscation and destruction of Palestinian land and resources, the disruption of the lives of the thousands of protected civilians and the de facto annexation of large areas of territory”).

And yet the irony is that Sen. Boxer did not need to pander to conservative voters in order to retain her Senate seat.  It was never a close contest.  She won easily by 20 percentage points (57.8% to Jones’ 37.8%).  Unfortunately, Proposition 66, the Three Strikes reform measure, did not fare as well—It was narrowly defeated with just 52.7 percent of voters opposing it.  Could the outcome have been different with the high profile support of Sen. Boxer?

Sure, it’s great if Sen. Boxer wants to grandstand against Rice now that she’s at the dawn of a new six-year term and the coast is clear.  But most of her Democratic colleagues refused to join her in her vote against Rice because they were doing  precisely what she was doing just a few months ago.   They were ignoring principles for their own self-preservation in future elections. But isn’t voting badly to keep your seat practically the same thing as losing? In one case you can’t cast good votes because you lost, and in the other case you can’t cast good votes because you’re scared and want to stay elected. Isn’t it better to fight and occasionally win on issues of importance than hide in the shadows, preparing for some future mythical fight?

Democrats like Sen. Boxer justify their bad positions on the theory that the left needs them so much that it will excuse their poor votes because they will eventually vote the “right” way on key issues.  But, the argument that Sen. Boxer and the “progressive” Democrats will vote better later is how we ended up with an opponent to Pres. Bush who supported the war, voted for the Patriot Act and opposed the Kyoto protocol.  Ask yourself, how well did this strategy work in that race? Clearly, the Democratic Party’s strategy for opposing the Bush Administration is not working. And even as I write this, the Democrats are actually considering selecting a chair of the Democratic National Committee, Tim Roemer, who is anti-abortion.

I’m sorry, but this is not what an opposition party looks like.  Democrats who keep waiting for their party to become more progressive need only look to Sen. Boxer to understand that self-serving politics makes it impossible to offer real resistance to Pres. Bush’s agenda. You can applaud Sen. Boxer if you like, but remember that with this kind of strategy, there will be 43 other Democrats in the Senate trying to figure out when it’s personally beneficial for them to take a principled stand.

Wouldn’t it just be easier to always take a stand?