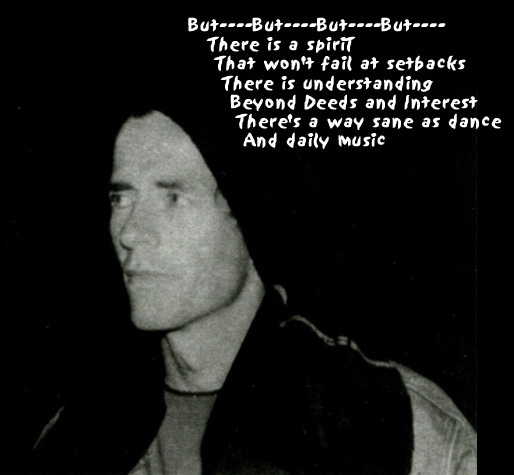 I  FIRST MET DON PAUL a couple of years ago on Federico Garcia Lorca’s birthday, June 5. He had come to my home in the Mission District of San Francisco for the wedding of poets Jack Hirschman and Agneta Falk. I can’t recall now why he couldn’t stay long, but we did manage to have a passing conversation. He told me that he knew I was running for District Attorney, which surprised me since it was such an obscure effort. I recall thinking that he had a good smile and was earnest. He was someone I knew I could trust.

Later, he joined my campaign effort and was the first person to put up a street sign on my behalf. Although it was a noble effort, I was not elected. Nevertheless, we became friends. I remember later introducing him to someone as “Don Paul, one of the Generals in my campaign for District Attorney.” But the moment I said it, it seemed rather absurd. Our campaign team was too small to be called an army; at most we had been a battalion; so it was doubtful we could have had Generals. Colonel or Major would have been more appropriate.

The next year I ran for the Board of Supervisors. Paul could not help me, as he was one of the main strategists for Marie Harrison’s campaign for Supervisor in a District that included the Bay View Hunter’s Point area. I was sorry not to have him, but realized that he was doing important work for Marie, a committed activist. He was also building ties to the progressive African-American community which the Caucasian-Left in San Francisco had never really managed to reach. This time I was elected despite joining the Green Party mid-campaign.

During the early months of our friendship Paul had given me a 350 page book he had authored, a book of essays, and I was surprised that he had written so much and not spoken about it until then. The book had been published 20 years earlier and contained a lengthy essay comparing Thomas Mann and D.H. Lawrence. Later, I heard marvelous recordings of Paul delivering his poetry to music with a variety of improvisers, including tenor saxophonist Glenn Spearman. Among these albums, still unreleased, were “Flowers Smell of Gasoline”, “Fat Snake’s Tongue Has Got Talking Heads”, and “Cebolas! Cebolas!”.

What made these recordings important was the range of musical styles Paul used to convey his poetry. His voice and words became instruments in the musical compositions. Only the poet ruth weiss has managed to be so completely enveloped by music without losing the significance of the word. Thinking of Paul as a reader/performer I am reminded of a flyer I once saw advertising a poetry reading at the Village Gate on Bleecker Street in New York City. It was probably from the early 1970s, promoting Micheline, Ginsberg, Bremser, Huncke, and others. But what really caught my eye was the center of the flyer which had a drawing by Ted Berrigan of a man playing saxophone and of another man coming out of the horn reading from his texts. That poet is how I imagine Paul and the saxophonist is how I imagine Glenn Spearman – fused together in collaboration until poetry cannot be separated from song.

Don Paul’s poetry combines a populist style with a free jazz aesthetic that works to further its political content. Born in Nova Scotia on Bastille Day in 1950, he has worked in canneries in the Pacific Northwest, in a warehouse packing fruit in San Jose, as a roughneck in the Gulf of Mexico. I mentioned these biographical facts because they inform his poetry. Simply put, his work cannot be understood without recourse to his politics and to the lyricism of song. He uses the medium of poetry in the service of social change because he has been a witness to late capitalism and American hegemony. For Paul, poetry is a conduit for that elusive thing called consciousness.

So, to the reader who holds this book in his or her hands. Read these poems and listen for the music that is there. Listen to the sound and acceleration kicking in and out of it. If you read carefully  you will hear Don Paul, transparent of heart, singing his songs.