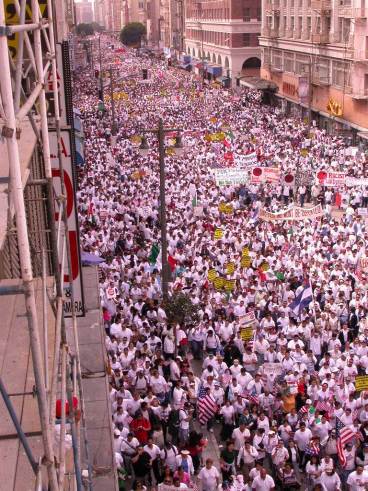 GIVING NONCITIZENS ACCESS TO THE VOTING BOOTH by Matt Gonzalez

AMERICAN PATRIOTS WHO TOSSED tea into Boston’s harbor in 1773 had a list of grievances against the king of England, which included that they weren’t represented in Parliament despite paying heavy taxes. The cry “no taxation without representation” succinctly captured their sentiments.

The Cato Institute reported in 1997 that immigrant households in the United States paid an estimated $133 billion in taxes to federal, state and local governments — from property, sales and income taxes. The National Research Council of the National Academy of Sciences reported that typical immigrants pay an estimated $80,000 more in taxes than they receive in federal, state and local benefits over their lifetimes. Yet, noncitizens are routinely denied voting rights in the United States.

This hasn’t always been the case. Until the early 1920s, more than 20 states allowed noncitizens to vote in municipal, state and, in some cases, federal elections. The U.S. Supreme Court affirmed the right of states to confer these privileges in 1874, in Minor vs. Happersett, saying “… Citizenship has not in all cases been made a condition precedent to the enjoyment of the right of suffrage.” In 1904, in Pope vs. Williams, the court noted that “the State might provide that persons of foreign birth could vote without being naturalized.”

It’s not surprising the court reached this conclusion. At the time of the Declaration of Independence, voting wasn’t based on citizenship — but rather, on whether you owned property. Since then it has been extended to women and African Americans — and ought to be restored to immigrants actively participating in our society.

Some American cities have done just that. In Chicago, noncitizens have been voting in local school-board elections for nearly two decades. Similarly, in New York City, before Mayor Michael Bloomberg dissolved the school councils for unrelated reasons, noncitizens voted in school elections for 25 years. In Maryland, six cities (including Chevy Chase and Takoma Park) allow noncitizen voting in all municipal elections. None has complained of any difficulties with implementation.

I have introduced a proposal under consideration by the Board of Supervisors for San Francisco’s November ballot that would confer voting rights on noncitizens who have children in the public schools. It would apply for just two election cycles. Thereafter, the Board of Supervisors would review its efficacy.
Giving immigrant parents voting power will foster greater parental involvement in their children’s affairs and heighten the likelihood that elected representatives of the district address their needs. It will also empower their citizen children who are too young to vote.

Some voice concern that illegal immigrants will register to vote. But experience in other cities has shown that such immigrants aren’t interested in drawing attention to themselves. They simply don’t go to City Hall to register to vote because they are trying to avoid government altogether. In San Francisco, all registrations will be subject to public disclosure laws, including our Sunshine Ordinance, so it’s likely to be the same here.

Others argue noncitizens who want to vote should become citizens. But immigrants seeking citizenship often face enormous bureaucratic obstacles, with the wait averaging 10 years, according to Ron Hayduk, a professor at City University of New York. Moreover, since the terrorist attacks of Sept. 11, 2001, waiting times have increased dramatically.

Interestingly, Americans living abroad are routinely allowed to vote in municipal elections in other countries without giving up their American citizenship. Ireland, Canada, Spain, New Zealand, Bolivia, Chile, Uruguay, Denmark, Norway, and Switzerland are among the 23 countries that afford this right.

Some critics have raised objections on legal grounds, but as with every effort to push the envelope, there are always legal uncertainties. This is true of same-sex marriage, gun control legislation and domestic partnership laws. Laws evolve because they are challenged — often making our society more inclusive.

San Francisco should be proud to lead this effort in California.

It’s worth noting the diversity of San Francisco’s population — 37 percent are immigrants, according to the U.S. Census Bureau. Granting noncitizens the right to vote further democratizes our city and is a reply to the post Sept. 11 anti-immigrant sentiment that has taken hold in much of the rest of the country.