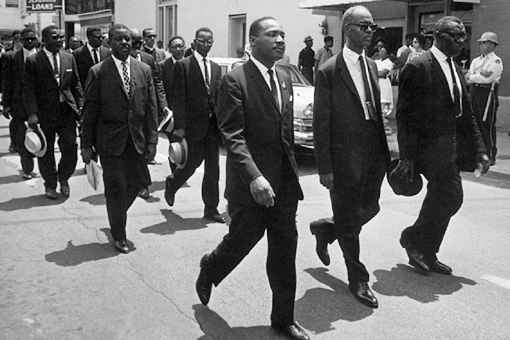 Martin Luther King and other civil rights leaders walking in a funeral procession for Medgar Evers, 1963

CHANGE BEGINS WITH YOU
While our system of democracy was designed to represent us all, in practice we find that government belongs only to those who assert their influence over it. Your influence is your voice. And your voice is your vote. The beauty of our political system is that every vote carries equal weight – whether your polling place is in Pacific Heights or in Sunnydale.

The right to vote is so essential to our process of civic leadership that many have given their lives to ensure this right was extended to all. Civil rights activists James Chaney, Michael Schwerner, and Andrew Goodman in Mississippi and Viola Liuzzo in Alabama were all murdered simply for registering African American voters. And their efforts came after decades of struggle to eliminate unfair poll taxes, literacy tests, and grandfather clauses, all of which prevented African American citizens of this country from exercising this fundamental right.

YOUR VOICE MUST BE HEARD
Today, in San Francisco, big businesses, the affluent, and the influential all go to great lengths to organize their families, friends and peers to ensure that they are represented at the polls. And most often, they vote to protect their own interests, not yours.

The wealthy in San Francisco don’t contend with polluting power plants in their neighborhoods. Police in their districts don’t behave the way they do in the Bayview. Street repairs don’t take months to get completed. Do you think it’s an accident?

If you want change you have to vote for it. Vote for someone who will champion your causes – jobs with dignity, affordable housing, a safe environment for you and your families, and access to quality education and healthcare.