first published in Keegan McHargue: Natural (SF: Frey Norris Contemporary & Modern, 2011); reprinted in As It Ought To Be, September 2, 2011

By the age of 21, Keegan Mchargue was already being feted as an important emerging artist to watch. Debut solo shows in New York in 2003 at the Wrong Gallery and Rivington Arms followed group shows in various cities including New York (Deitch Projects), Los Angeles (Roberts and Tilton), and San Francisco (Luggage Store). If this wasn’t enough to stake his claim in the contemporary art scene, Mchargue was profiled in the prescient Wall Street Journal article “The 23-Year Old Masters” alongside artists Dash Snow, Ryan Trecartin, Rosson Crow and Zane Lewis, among others.

Mchargue’s  “Natural” marks his return to San Francisco as a seasoned artist ready to show that the promise critics recognized eight years ago has been realized, and his artistic vision has sustained beyond his youthful success.

Mchargue’s positive critical reception, has occurred in part, because he is emblematic of his generation in production, theme and concept. He exemplifies a new kind of artist who employs a kind of multitasking approach to synthesis and a kaleidoscopic penchant for changing forms and ordered randomness. This peripateticism blurs categorization and departs sharply from the single-concept-driven idea of exhibition, so common within the art world today.

Although firmly rooted in an aesthetic more closely associated with the Mission School, Mchargue is fascinated with the subconscious, and his work is as much about revealing himself and forcing the viewer to engage with his associations as it is about anything else.

The Surrealists also presented artworks as a manifestation of the subconscious, yet the work they made, while tapping into the unconscious mind, was subject to a psychoanalytic critique that accused it of being highly shaped and processed by the ego.

Juxtaposed against the unorganized instinctive drives and impulses of the subconscious, the ego represents the rational and organized aspects of personality. When present, it contains and boxes in the work of art and limits the kind of inquiry into personal subject areas an artist might otherwise attain.

Unconscious desires and concerns need a mechanism to break through repression. Mchargue attempts to overcome ego by simply taking from a disordered panoply of subject matter. The resulting work is filled with unexpected juxtapositions. Dismembered beings and leprechauns are followed by grid patterns and non-sequiturs. 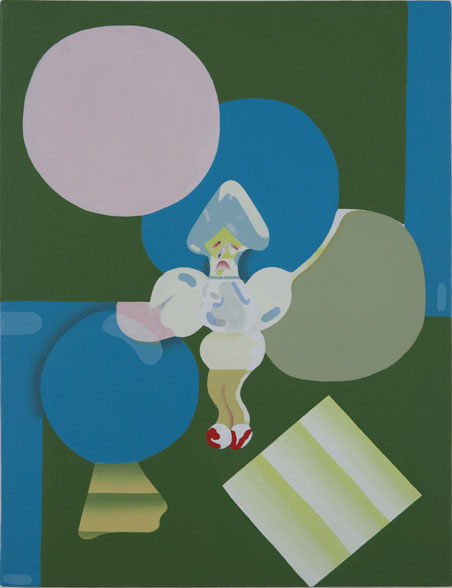 Mchargue was raised in an artistic household. He has noted that his mother encouraged drawing exercises, such as drawing objects upside down and backwards.  During his obsessive art-making period, Mchargue believes he drew thousands of shoes.

When he paints today, Mchargue harvests these memories and mixes them with contemporary influences. He expresses the subconscious with fantastic imagery and incongruous pairings of subject matter.  His fascination with music, the act of painting with the television on, and his art-infused upbringing all compete as influences.

In some sense the work is an experiment in unfiltered material that simply flows together.  It is arresting because it tries to capture a car crash of ideas and images that smash into each other. The fetishization for multitasking and the production of kaleidoscopic forms underscore whimsy, randomness and the curious order that comes through synthesis.

Mchargue also enjoys removing objects from their natural landscape and placing them in a neutral or negative context to draw them out. By isolating and simplifying the object, he strips it to its essential details which allows the viewer to see it without distraction. At times he seems to place an object in a painting simply because there was space for it there.

The wandering nature of Mchargue’s influences also compels a comparison to the members of the Situationist International, particularly Raoul Vaneigem and Guy Debord.  While they rejected commercialism and would have likely objected to the use of Mchargue’s geometric grids, they do nevertheless have one point of comparison. Their concept of “the dérive,” or the drift, which dates to 1958, in effect was the exposition of psychogeographic method which culminated in explorations in a city with no predetermined purpose, a wandering much like Mchargue’s, although McHargue does it wandering within a mental landscape.

In a dérive one or more persons during a certain period drop their usual motives for movement and action, their relations, their work and leisure activities, and let themselves be drawn by the attractions of the terrain and the encounters they find there… But the dérive includes both this letting go and its necessary contradiction: the domination of psychogeographical variations by the knowledge and calculation of their possibilities.

Mchargue’s work is authentically trying to rid itself of preconception and design. And Mchargue’s peripateticism is just that: the wandering mind of someone who manifests his thoughts on a surface, be it paper or canvas, or sculpture. The work is personal and idiosyncratic.  It doesn’t feel made for someone else. Rather, we are invited to eavesdrop on the wanderings he has undertaken, culminating in the finished canvas. His itinerant quality reaches for influences and references without regard to art historical appropriateness.

Matt Gonzalez is a collage artist, lawyer, and politician living in San Francisco.