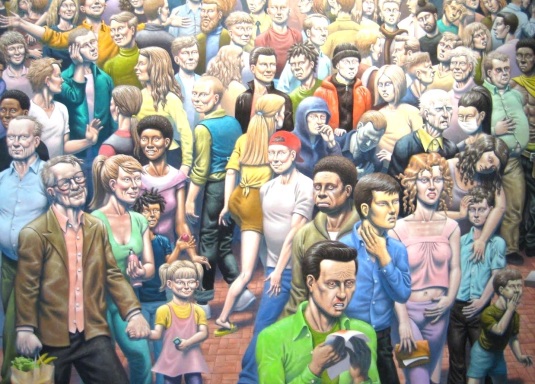 Epidemic (2009) by Guy Colwell, in the collection of the Crocker Art Museum, Sacramento.

THE HINGE OF REALITY:

THE ART OF GUY COLWELL

Although Guy Colwell began making art with a political slant during the social upheavals of the ‘60s and ‘70s, he recently gained international notoriety for his painting, The Abuse, which depicts the torture of captured Iraqis by American soldiers at Abu Ghraib prison.  In many respects it is a fairly straightforward rendition of an amalgamation of photographs that were widely circulated in 2004: in the foreground, three naked and hooded male detainees are being confronted by two soldiers holding electrical wires and batons. In the background, a female detainee is being led into the room by another soldier.

The reaction to The Abuse was immediate.  The gallery owner who exhibited the painting in a San Francisco North Beach gallery received hate mail and was physically assaulted, resulting in an abrupt end of Colwell’s show. What provoked this dramatic response?  It was that Colwell presents the soldiers with facial expressions that capture their incipient glee and enthusiasm; an attitude strikingly apparent in the Abu Ghraib photographs but one that hadn’t been isolated in this manner. The possibility that any individual, given the right circumstances, could engage in the horrific activities which Americans see themselves as standing against, is precisely what Colwell sought to highlight, in effect, challenging our national sense of identity. While Americans consider the whole episode a shameful anomaly they’d rather forget, Colwell uses his signature style, part neo-realism, part graphic drawing techniques culled from his‘70s underground comic art background, to emphasize that America is not immune from engaging in war crimes. Rather than blood or pain, Colwell focuses on pleasure. He emblazons bright-colored American flags on two of the soldiers’ shirt sleeves leaving no doubt who is committing the atrocities. The rest of the canvas is in stark comparison, painted in muted grey.

Colwell’s art is motivated by two primary sentiments: first, a deep political strain meant to expose and offer commentary on current political, economic, and racial disparities that exist in our society; and second, an awareness of man’s uncomfortable relationship with nature and sexuality. Often he presents utopian scenes as if to suggest what could exist. At other times, he highlights racial strife and man’s baseness. Both are about asking the viewer to contemplate contemporary society and reflect on rationality and the presumption of social progress during an era of great technological advancement.

Colwell has called his body of work “figurative social surrealism.” There is no question that he both shares and embellishes his canvases in the traditions of figuration, surrealism, and even WPA social realism. But the introduction of both non-sequitur narrative elements and an ability to present varied facial expressions brings to his work something which both heightens the message of angst and allows a critique of society’s socioeconomic conditions through the rendering of absurd juxtapositions. In some instances he uses color, both the presence and absence of it, as well as construction scenes to foil forces which both build and destroy the future and past. He also draws inspiration from classical Italian painters in presenting perspective, thus conveying a sense of depth and history.

After an eighteen-month stint in federal prison for refusing the Vietnam War draft, time he served at McNeil Island in Washington State, Colwell lived and worked as a painter in the transformative Haight-Ashbury and Fillmore neighborhoods of San Francisco. Racial divides were prevalent and became fodder for Colwell’s vision. His comic book, Inner City Romance, addressed these issues and only solidified his graphic comic drawing line in the tradition of Robert Crumb, Spain Rodriquez, S. Clay Wilson, and many other artists published by Last Gasp and Rip Off Press. 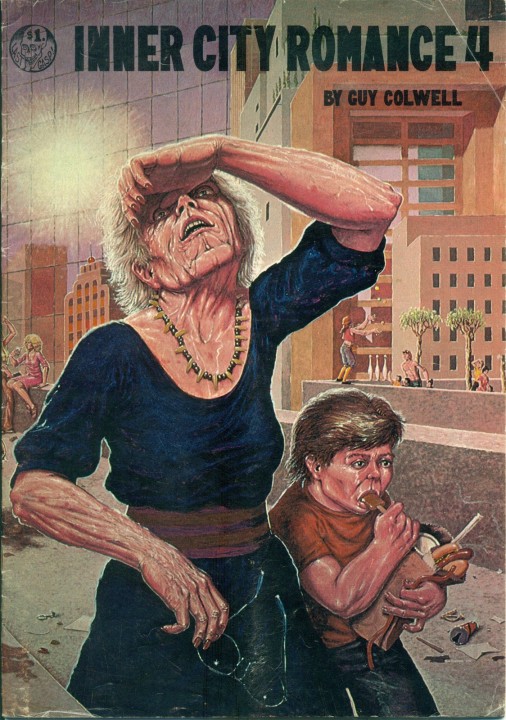 Colwell’s canvases are often crowded with people, yet he manages to individualize each one.  In Epidemic, now in the collection of the Crocker Art Museum in Sacramento, with each face, each body, each gesture that he captures, he painstakingly brings each person to life so the viewer can spend time reflecting over the defining minutiae of the individual that modern life often brushes over. Colwell crams these people into a canvas like a modern-day Hieronymous Bosch, capturing the collective, and yet individualizing the personal experiences of alienation and disconnectedness. The myriad of expressions simultaneously include: angst, ecstasy, fear, and satisfaction. His meticulous detail forces us to see the individual anew.

Other canvases play with reality. In Institutional Warthog, a wild, tusked pig walks calmly down what could be a university building hallway, about to come face to face with an alarmed college student. The placement of seemingly discordant objects next to one another provokes a sense of creative absurdity and wonder. Colwell is suggesting that our understanding of man’s relationship to animals is a normative construct, that we have become isolated from our true origins, but they nonetheless remain embedded within us and need to be confronted. The unexpected wild animal encounter also suggests a commentary on the incongruous relationship between academia and student. By depicting institutionalized learning as savage and unyielding, Colwell reminds us that students have their own wild and creative natures which institutions tame and make uniform. In Not Exactly Peaceable Kingdom he depicts over seventy persons sharing space with various wild animals. The setting is awkward – given we might expect a powder keg of violence accompanying the proximity of people to an assortment of animals including lions, tigers, elephants, and bears. The painting invites us to question our assumptions about being human while imposing utopian ideals. It points to the ambivalence and alienation that exists in our relationship with nature.

Colwell’s work directly addresses poverty, hunger, and growing class divide. In Reception: Self Portrait with Mop, the placement of a man with a mop in his hand cleaning spilled wine in the midst of an elaborate party aptly suggests the chasm between rich and poor.  Utilizing the sharp line of the Flemish painters of the Northern Renaissance, Colwell depicts a humble man, who would otherwise be entirely invisible in the crowd, now rendered as the focal point, thus calling attention to excess in the face of economic struggle. Colwell both declares his independence and separation from the scene, yet for the moment is trapped in an oppressive economic circumstance.  Colwell may, in fact, be the unassuming janitor, but his presence of mind is unmistakable.  In cataloguing that which others don’t wish to see, Colwell pins the frame of reference at the point of its most powerful axis, the hinge of reality. 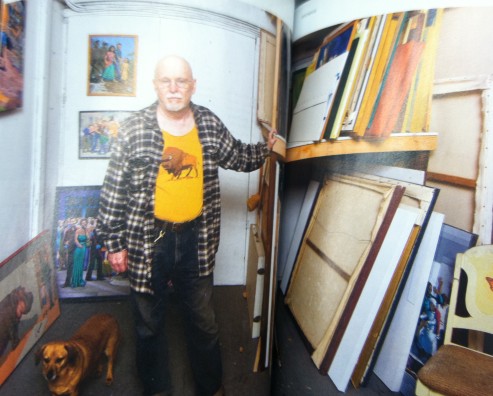 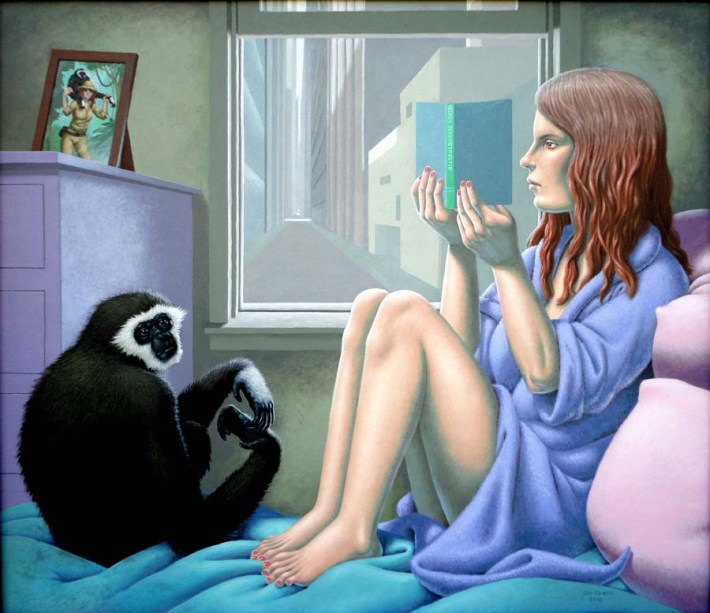 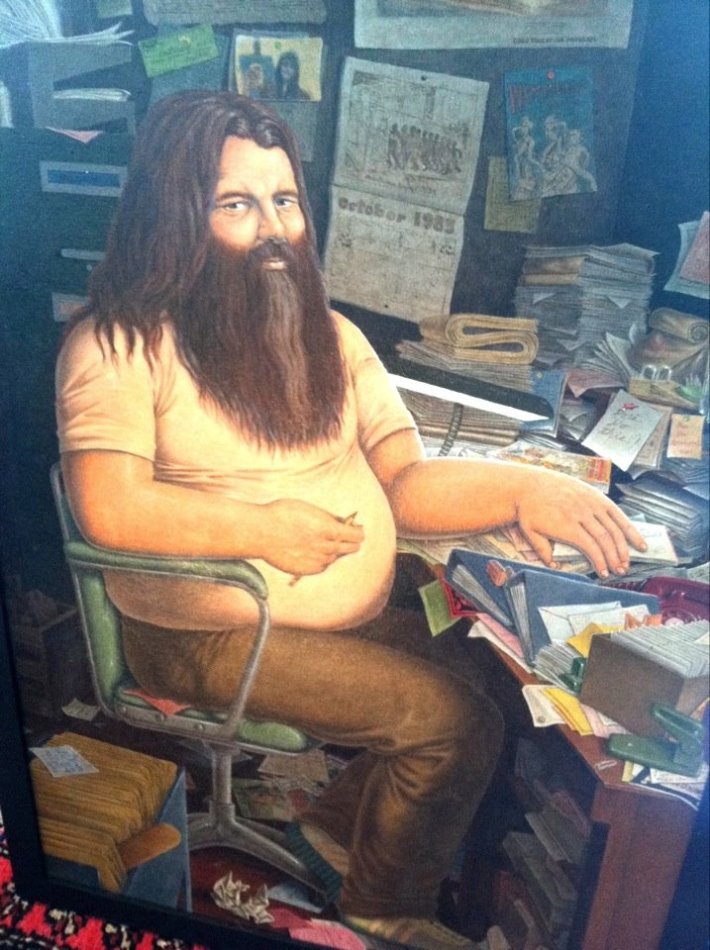 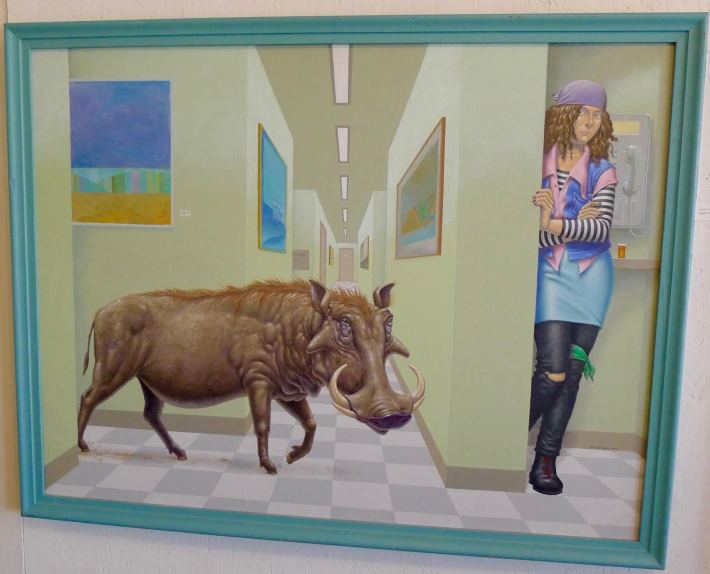 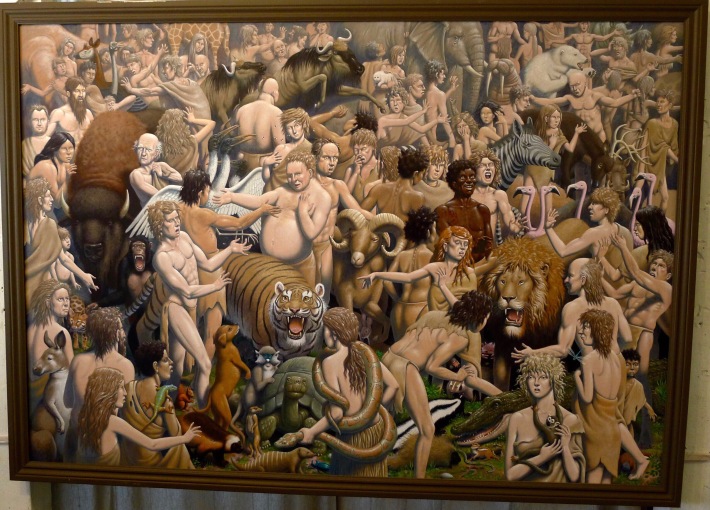