Sherie’ Franssen’s show at Dolby Chadwick Gallery, The Gorgeous Nothings, follows her critically acclaimed show from 2012. Seven sizable canvases, the largest measuring 77 x 83 inches, comprise the majority of work on display, and all the paintings date from 2013–14. Franssen’s abstractions begin with an under-painting of figurative elements that she adroitly obliterates, leaving non-objective finished works. What appears uncontrolled and disorderly slowly reveals the grounding effect these figures lend to the paintings, allowing for a formal looseness. A rapport with Willem de Kooning and Joan Mitchell’s paintings is evident, particularly the untitled paintings de Kooning did from 1975–77. Yet Franssen makes abstraction her own, and the discernible chaos that manifests, is at all times hinged by the substrata of landscape and figures. In contrast to de Kooning, Franssen isn’t modest in her application of brush strokes. 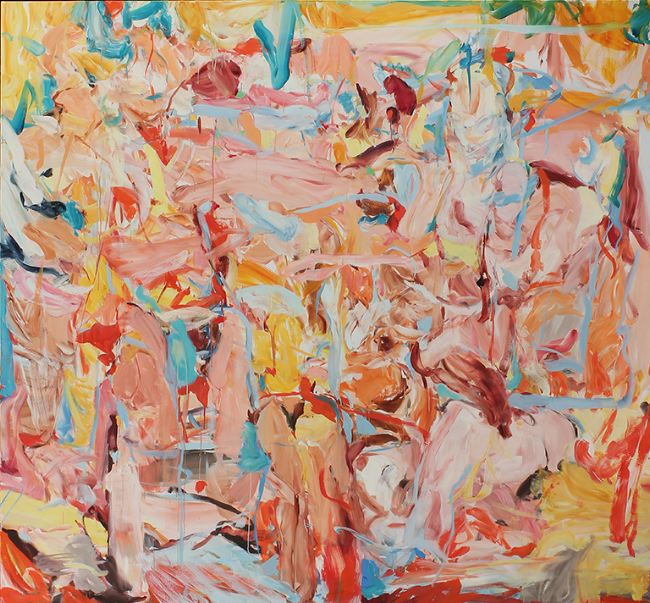 In most of the canvases, Franssen demonstrates a focus on multicolor integrations, often relying on the interplay between cool and warm tones. This is particularly apparent in both The heaven we chase and in the summer went where two or three colors predominate and interact. However, the slight evocations she achieves within a single color are remarkable for the multiplicity of variation. These subtle changes in hue is where Franssen is most captivating, exhibiting a refined degree of nuance.

Two large figurative works are redolent of Robert De Niro’s oil canvases of the late ’70s. In Dawn in Timbuctoo, her process is revealed as she restrains herself to allow, even invite the viewer to see her method of making a painting. In the other, Pink Wave (oil on canvas, 67 x 65 inches), her discipline allows the viewer to see the alluring movement of the figures caught mid-motion. Both works can be read as “bather” paintings in the tradition of Paul Cézanne. Of note, Cézanne’s most famous such painting Les Grandes Baigneuses (collection of the Philadelphia Museum of Art) remained unfinished at the time of his death in 1906, despite seven years of effort on it. Yet no viewer today would complain that it lacks resolution. Likewise, Franssen’s figurative pictures are completed works she could have continued to paint on. 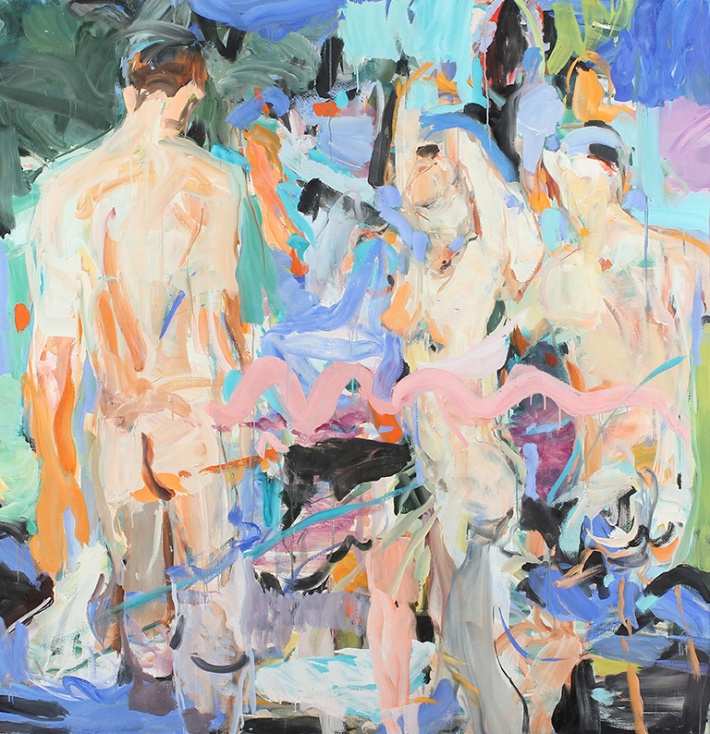 Despite the predominance of abstraction in this show, Franssen is not trying to rid herself of figurative compositions, nor should she. What is noteworthy is that these works coexist with the fully abstracted canvases, each benefiting from the presence of the other because each awakens essential elements in their counterparts.

In Pink Wave, Franssen places a thick wave of paint in the foreground over the central figure—a female figure with arms raised—which should ruin the composition, but instead makes it whole. It is hard to imagine the painting without this perilous gesture that serves to draw attention to and even permit depth in the painting.

The smaller paintings, including my favorite, the medium-sized Poems on the floor that greets the visitor as they enter the gallery, have all the presence of something monumental.

The Gorgeous Nothings at Dolby Chadwick Gallery runs until January 31, 2015.