A gun’s history of accidental discharges

Jose Ines Garcia Zarate is accused of firing a gun at Kate Steinle on San Francisco’s Pier 14, two years ago. A semi-automatic handgun owned by a Bureau of Land Management employee and made by a German manufacturer, SIG Sauer, is at the center of the upcoming trial.

Some gun enthusiasts have objected to the Garcia Zarate defense team’s assertion that the SIG Sauer is known for accidental discharges. They invoke its reputation for quality when fired under ideal conditions. Yet, claims the gun is accident-prone cannot be brushed aside — that’s because the SIG Sauer operates exactly as designed. It’s an elite handgun intended for law enforcement and military personnel who may need to fire it with split second notice. Hence, it has a hair trigger in single-action mode. Even among well-trained users, it has a lengthy history of accidental discharges.

In 2002, a San Fernando police officer dropped his SIG Sauer, causing an accidental discharge that killed him, refuting claims the trigger must be pulled to fire the gun.

In 2008, a police officer in Connecticut accidentally discharged his SIG Sauer while holstering it.

In 2011, a security guard in St. Louis dropped his SIG Sauer, unintentionally shooting someone.

In 2012, a New York transit officer accidentally discharged his SIG Sauer while holstering it.

In 2014, a federal air marshal in New Jersey unintentionally shot himself while handling his SIG Sauer service weapon.

In 2015, a Pennsylvania state trooper and firearms instructor accidentally killed another trooper with his SIG Sauer while conducting safety training.

In 2016, a tactical response training instructor near Sacramento dropped his SIG Sauer, firing a bullet into a student’s truck.

In 2017, a sheriff’s deputy in Michigan accidentally discharged his SIG Sauer, striking a schoolteacher in the neck.

Even at SIG Sauer’s own training academy in New Hampshire, the arms manufacturer has admitted to accidental discharges causing injury in both 2016 and 2017.

Civilian examples are numerous, such as occurred in 2006, in Spokane: While using a restroom at Costco, a man discharged a SIG Sauer he carried in a shoulder holster, when his shirt somehow engaged the trigger.

The SIG Sauer in Garcia Zarate’s case has three features prone to accidents:

SIG Sauer P39, similar to the one used in the Garcia Zarate case.

New York City requires officers using SIG Sauers to disable its single-action function because the hair trigger is too dangerous. Those using the gun can only do so in double-action mode, which has a 10-pound trigger pull.

Still capable of accidentally discharging, it provides some modicum of greater safety. However, single-action was not disabled on the handgun involved in this case, which Garcia Zarate says he found wrapped in a T-shirt, thereby concealing its danger.

Those opposing gun restrictions can obfuscate any individual case, but the evidence is overwhelming: accidental discharges of guns (most with heavier trigger pulls than the SIG Sauer) occurs with frequency. The National Center for Injury Prevention and Control estimates more than 10,000 unintentional firearm deaths in the United States since 2000. The number of nonfatal shootings is undoubtedly higher.

For the trained police and others who experienced accidental discharges, and their unintended victims, Garcia Zarate’s claim is not far-fetched, but simple reality. 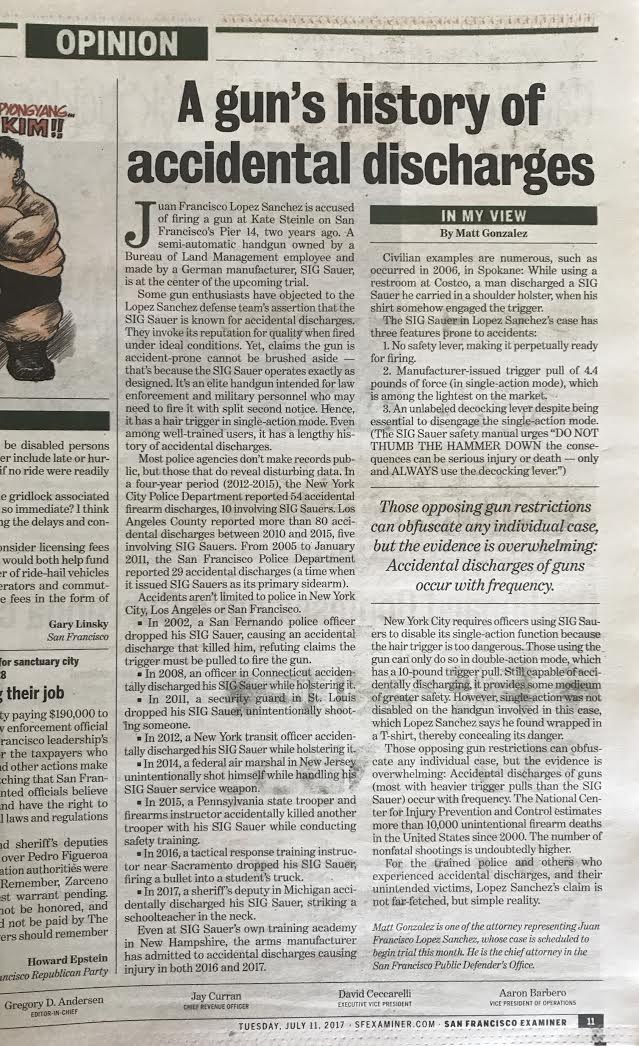