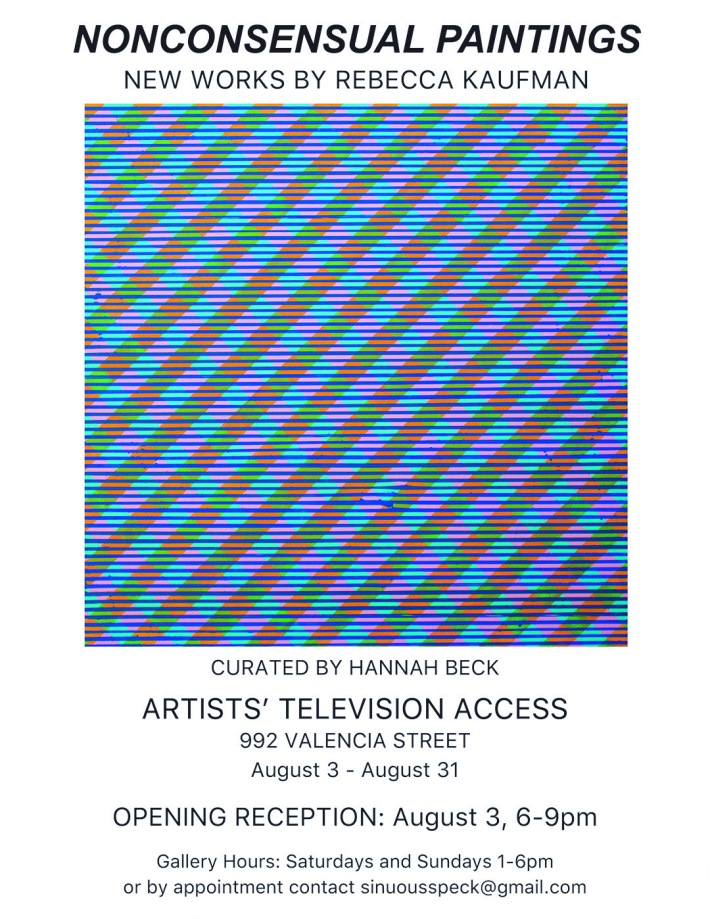 The fundamental premise of op art has always been to use seemingly uniform lines to create an effect on the eyes and brain, causing an optical illusion that affects a viewer physically. Kaufman is interested in the ways these painted lines confuse the retina and even disrupt perspective. 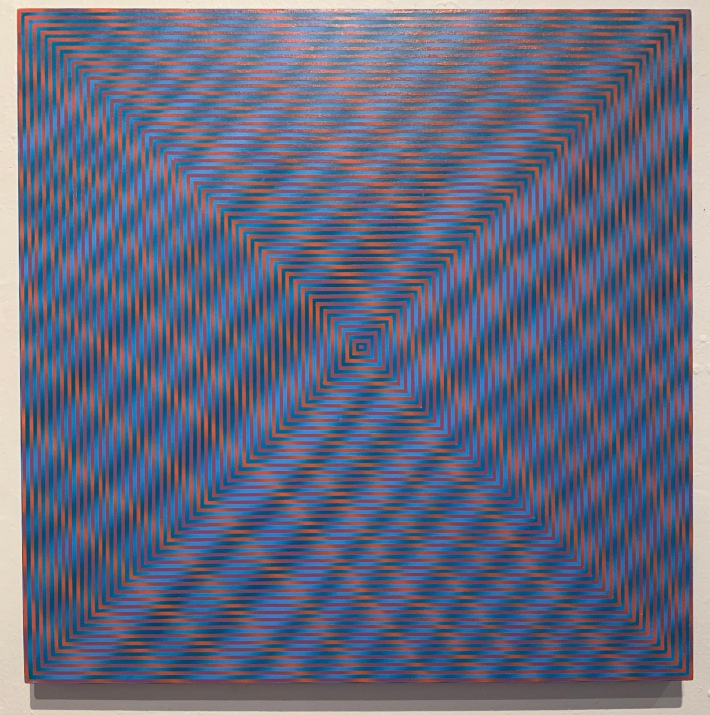 For one thing, the painted lines create movement and vibration where there actually is none. This visual confusion causes afterimages that also impact the viewing experience as the eye runs across the surface of an entire painting composition. The resulting surface hum and shift alter perspective lines and highlight superimposed design elements further challenging how the eye processes light. Ultimately, the paintings address both how human vision functions and the involuntary nature of optic choice. The viewer is left with the impression of movement, hidden images, flashing and shivering patterns, or of swelling and warping, without any ability to select which.

Non-objective art already poses a dilemma for viewers who instinctively look for recognizable imagery, such as landscape or figuration. Kaufman’s abstractions add further obfuscation via varied lines and moving color forms reminiscent of the static on a blurry TV screen. Yet it’s a controlled action on her part, where the entire composition isn’t diffuse or affected all at once. Additionally, by layering cool and warm colors, she boost contrast and offers the coexistence of concave and convex formations or tendencies.

This harmonized coexistence is particularly evident in After Shock Treatment II and After Shock Treatment III, both acrylic on canvas. These paintings cause an illusion of space and depth where 3-dimensionality is suggested on the flat surface of the canvas. Foreground and background — two typically harmonious planes linked by perspective — are now sometimes at odds, and in that collision, perspective changes direction again. 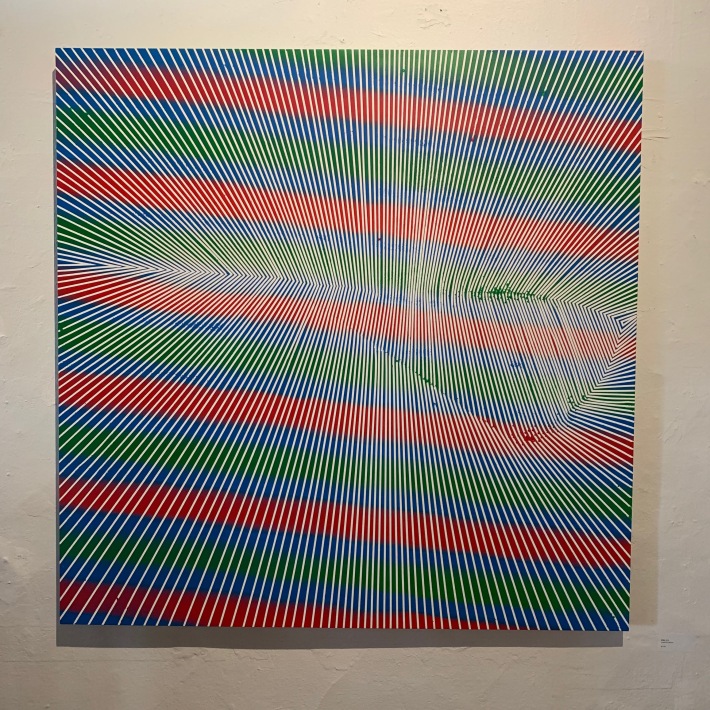 Perhaps Kaufman’s most effective technique is the addition of blemishes to the repeating line configurations. These are reminiscent of spray paint drips that one might see in Street Art. Kaufman’s “glitches” keep the composition from being fully uniform and therefore not strictly geometric. In some places the marks appear to be reductive, the line lacks clear definition as if mice have gnawed away at the edges of the line. In other moments, the marks are reminiscent of the way ink might have splattered onto the page from a dripping fountain pen. RGB is a particularly effective painting. In this work (acrylic on canvas, 60 x 60 inches, dated 2019), Kaufman manages to alter the formation of the lines to suggest a sewn seam or indention in the surface, such as a letter press might form,  to create both a horizon line and an off-center diamond like form. It’s a piece that projects shimmering light with the resulting disruption of the repetition forcing the viewer to try and make sense of it. In part these smudges or disruptions serve as a reminder that a human hand is involved. 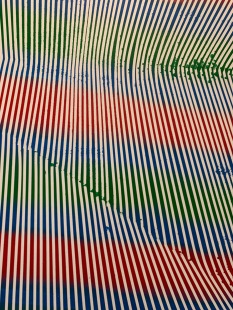 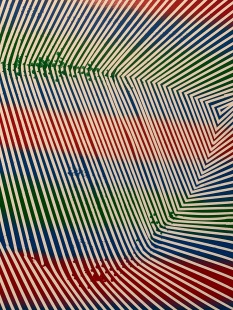 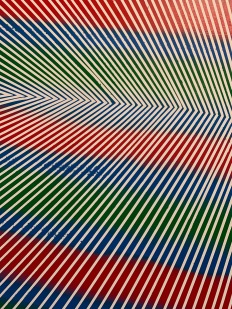 The exhibition’s title references both the effect op art can have on the senses in causing a physical reaction but also the more provocative suggestion, noted in curator Hannah Beck’s statement, that the artist intends to evoke an apparent #MeToo reference. She likens the nonconsensual effect to the nonconsensual sexual advances women have had to contend with for ages, arguing that Kaufman’s painting “takes back female space with size and content devouring your gaze and space.” 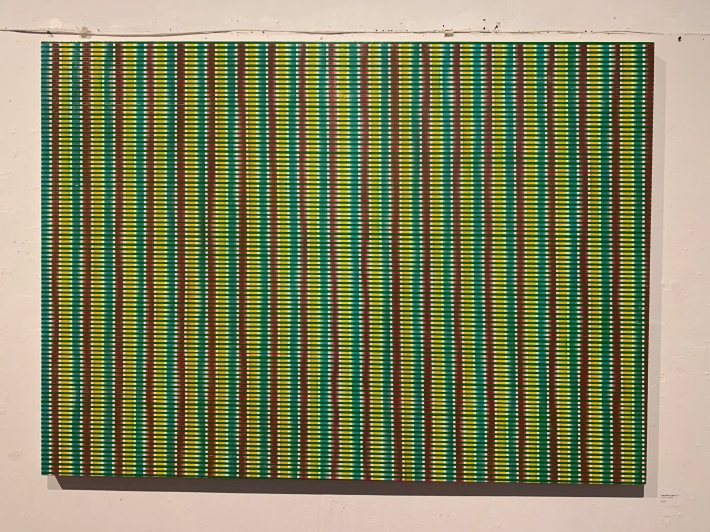 It may be a leap to think women regain power by creating their own mechanisms of nonconsensualism. Rather, the vulnerability a viewer feels, in the presence of op art made by a woman who intends the effect, can for a moment, make the viewer experience something where they themselves are not in full control. Kaufman certainly accomplishes this. Nonconsensual painting is an apt way to describe op art. It’s art that does something to us without our expectation, and without our approval. Yes, we agree to look, but after that, it is whatever it wants to be, even perhaps individual for each person.

Kaufman, who received her MFA from the San Francisco Art Institute in 2017, is well on her way to giving op art a second wind. The question is how to sustain it. Is the illusion or trick of the eye enough or does the painting have to make an event or experience that heightens and transforms the act of looking? Kaufman succeeds at both.