Christa Assad has been making objects out of clay for over two decades. She is among an elite group of studio potters who excel at making functional vessels such as teapots and kitchenware. To explore form she often re-objectifies objects, many of them metal, which she reproduces as ceramic. Her pedigree is unassailable: Fulbright scholar, lecturer at the Kansas City Art Institute, her work’s been included in countless exhibitions. Yet, when she presented her show at Friesen Abmeyer Fine Art in Seattle, Washington earlier in the year, Assad avoided an inquiry purely into form and design common in ceramics circles, preferring rather to present thrown and constructed sculptural vessels whose subject matter ventures into a commentary about war and decaying cities.

The show Christa Assad | ReObjectification at Friesen Abmeyer ran from March 22 to April 21, 2012, and coincided with the National Ceramics Conference (NCECA) which was hosted by Seattle this year. The show included over 50 pieces ranging from ceramic fire hydrants presented on display stands, clay pigeons standing alongside them, and paint cans strewn about, covered with bright primary colors seemingly dripping out from the sealed tops. The show included oversized hand grenades, and more ceramic imitation spray paint cans whose sides were adorned with graffiti by Assad’s collaborator Jessica Hess, who also shows a few paintings of her graffiti-filled images. Also, tucked away in one corner was a small but compelling 14″ by 8″ looped film projection by another collaborator, David Gantz, depicting industrial images, cranes, smokestacks, and railroad scenes all projected against two of Assad’s pure white ceramic beer bottles, set up side by side, measuring 24″ in height.

Three main impulses emerge in Assad’s work: a commentary and acknowledgement that contemporary art must recognize war; reminiscences of Assad’s upbringing in the aging industrial city of Pittsburgh, PA., and the extrapolation of that theme as it relates to all cities in America; and a direction that has permeated her work for some time, the reproduction of solid metal objects into the more fragile clay to elevate and fetishize their significance, much like Marcel Duchamp with his readymades.

The viewer’s attention is first drawn to work in three recessed display niches carved into the gallery’s outer wall all containing Assad’s teapots, which draw attention to that part of Assad’s oeuvre that is focused on contemporary architecture. Assad incorporates an industrial design element, in some cases modeling her teapots after the vintage 20th century steel clothing iron, for instance, thus referencing the industrial age. As if Christopher Dresser were making a claret jug, Assad transforms the humble teapot into something modern while maintaining its utilitarianism.

While the making of a teapot is often de rigueur in ceramic art circles, it is something Assad finds novelty in and has circled back to over and over in her own work so it makes sense to first encounter these objects. Yet these teapots give little hint of the themes that permeate the show inside: urban blight and decay, and war. It’s as if bait were offered enticing the viewer into a different expectation. 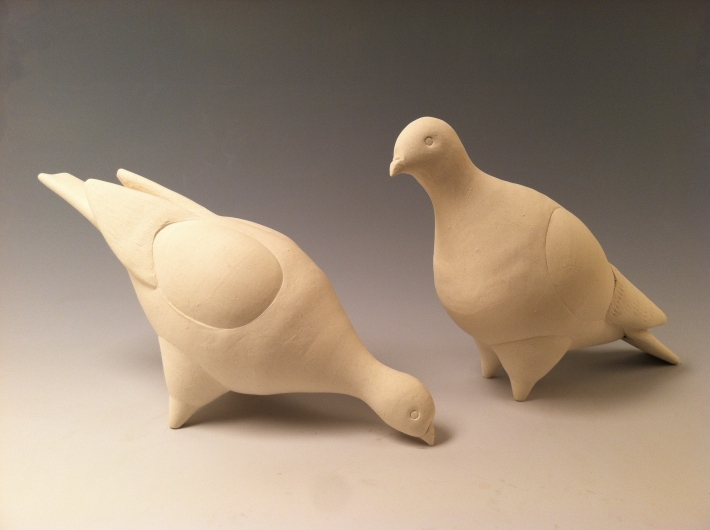 Inside the gallery, the pigeons and fire hydrants immediately evoke an urban environment, with the spray cans signaling the theme of urban decay. Then the oversized, yet lifelike, hand grenades suddenly shift the tenor of the collection from beautiful and spacious environment to one of war. The unthreatening presentation of such highly charged and dangerous objects creates an awareness of how safe we are compared to those in combat areas (one has to take into account that American soldiers have spent over a decade in Iraq and Afghanistan) and through its own artifice, emphasizes our incomplete understanding of the actual threat of warfare from the safe distance of an art gallery in Seattle.

Images of deteriorating urban areas are highlighted by the collaborative film projection by Gantz, entitled Bayshore, which shows multi-media digital footage from the San Francisco Bay Area where Assad lives today, yet which could just as easily be a Pennsylvania steel town in decay. While this universalizes that narrative it also offers a bleak reminder of what happens when scarce resources are siphoned away from already suffering industrial cities and funneled into a war effort.

Art and politics often don’t mix because the messaging is too propagandistic and explicit.  Here Assad manages to both create beautiful objects that test her skill at form, and speak to the responsibility of the artist during wartime, which is to remind the viewer of the hidden vestiges of state warfare that are covered up by layers of daily routines and the things we surround ourselves with.  As obvious as this might seem, revealing this without assaulting the viewer is uncommon.

Assad has credited the ancient history of ceramics as grounding her work and keeping it from “floundering in the superficiality of contemporary art trends.” I believe the same can be said for her political statement. It keeps the show from simply being about making a lovely object. When municipalities are losing hundreds of millions of federal dollars that might have otherwise been invested in schools and local capital projects, all redirected to cover staggering war costs, shouldn’t the artist speak to these issues? 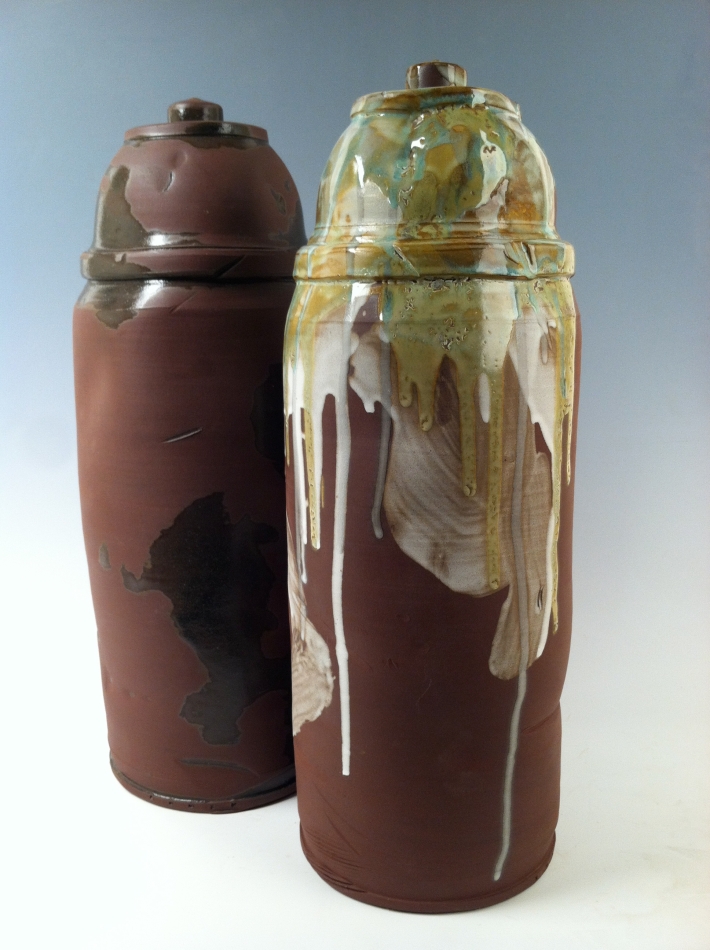 Assad has noted that while she was growing up in Pittsburgh, she was “strongly influenced by the Steel City’s dying industry and the grit of its abandoned sites, often tagged with graffiti.  The traces of trespassers and squatters and other physical remnants left behind at the closed factories are archaeological artifacts of human behavior and societal evolution.” These sentiments are manifested in the work which is filled with explicit depictions of old factories joined by the evidence of urban blight.

Assad also credits photographs of the Machine Age and of industrial buildings, by Berenice Abbott and Hilla Becher, as influencing her vision of the tension between technological advancement and society. Just as the industrial city ushered in an age of mass production that purported to improve lives, it nevertheless impersonalized the making of things. Technological advancements and a preoccupation with war, in its turn, now renders the Industrial Age passé.  Assad asks us to both mourn the loss of the industrial city, which once represented the modern, and to celebrate the possibility that a new age of crafts could emerge represented by her own hand-made work chronicling this evolution. The irony is apparent. In the meantime, we await a more human manifestation of what it means to make things.

David Gantz’s digital film/3D animation and compositing is layered with silhouettes of factories and smoke billowing out of chimneys, which directly correlates with Assad’s references in her own personal narrative and offers a reminder of what beautiful architecture comprises our forgotten urban landscapes. One can imagine the impression this desolation would have on a young woman and the enduring images that would manifest themselves in a later art career. The paintings by Jessica Hess are not graffiti in themselves but rather depict graffiti in city landscapes, sometimes to such an extent that the urban markings take up the entire canvas.

Assad makes the mundane exotic by taking ordinary objects and reproducing them in clay.  The very act of selecting a fire hydrant, for instance, makes the viewer ponder its significance, its design.  It transforms the typically irrelevant or seemingly anonymous object into something extraordinary. Assad credits her graduate work at Indiana University for developing a method of working from what she calls the model, “the model often being an antiquated machine or outdated industrial apparatus – to create, first, functional pottery designs, and second, larger-scale objects that glamorize the ordinary.” Assad concentrates on fabricating and re-imagining metal objects and industrial haunted playgrounds  in the medium of clay, turning these objects into socio-political artifacts, industrial wood burners, constructivist teapots, hand grenades, aerosol cans and towers along with a host of renegade shapes.

Much of Assad’s work is a meditation in the dialectics of function and form, the hardness of metal being a central concern, reshaped in the softness and fragility of clay, but still looking impermeable. There is something pointed and critical in her ability to give a teapot, as harmless an object as there ever was, the menacing sensibility of a tank turret. And at the same time she works in the opposite direction, transforming sharp inhuman metal industrial objects by giving them their humanity back. Assad doesn’t let us off the hook of being comfortable with the objects that surround us. When you look at them, they tend to look back.

To the extent that there is any such thing as urban furniture, Assad hits the mark by promoting the fire hydrant. Like the newspaper stand or light post, it is one of the most recognizable images that decorate the modern city. Assad make these things look beautiful. She also enlarges hand grenades to torso size emphasizing the very powerful element real bombs comprise and yet they have a serene quality and are beautiful as if one could take them into their arms and carry them home.

Assad muses on the significance of the hand grenade: “We humans have invented a hand-held bomb. A compact explosive, the grenade harnesses enough destructive power to set an enemy camp ablaze. Interestingly, the word ’grenade‘ is the French word for pomegranate. Soldiers commented on the similar shape and size of early grenades and the name entered common usage. As a potter and maker of hand-held objects, I find this comparison between a hand-held killing weapon, and a life-nourishing fruit of the same approximate size and shape too paradoxical to overlook. By enlarging this object to torso size, I discover its anthropomorphic qualities. The shift in scale also dramatizes the grenade as a symbol of power, control, and domination – qualities our nation embraces.”

Assad also explains her interest in the fire hydrant, which she calls “my favorite extra ordinary object. Found on every street corner in America – whether urban, suburban or rural and, in some cases, literally out in the sticks – the fire hydrant is an indispensable safety instrument, delivering high-pressure water to extinguish fires. For firefighters and civilians alike, this common apparatus is the ultimate vessel for water – a life force.”

Since the show at Friesen Abmeyer, Assad has been making work in response to the Syrian uprising that again emphasizes her political concerns. While she is quick to point out that her family has no relations to the Assad regime of the Ba’ath Party, she nevertheless traces family roots to that country.  Ceramics with tanks and war planes affixed to their sides again speaks to the need of the artist during wartime to express themselves and asks the viewer to take note. The Syrian regime has been particularly cruel in turning its own weapons against its people, using air and artillery strikes against any perceived to be aligned with the anti-government rebels. Assad says that this series addresses “my feelings of anger, helplessness and dwindling hope. Perhaps their quiet beauty, their ordinary forms acting as subconscious symbols, will draw in the viewer for a closer look at what’s happening.”

In our age of political disaffection any artist who speaks about politics is to be commended. Yet beauty permeates the work as Assad’s concern for form and proportion is never abandoned.

This piece was first published in the journal Ceramics: Art & Perception.