When describing Emily Fromm’s artistic style, reviewers uniformly draw parallels to vintage cartoons and comic books. While descriptively accurate, it misses a more abiding insight. Fromm’s work is compelling because it invites and pulls the viewer into the action of the canvas. That sensation of walking among the characters she draws, moving through streets, surrounded by recognizable signs, merges her audience with the bustle and charm of the city landscape. She makes the artistic interaction a participatory one. At a time in which so many residents feel alienated from a rapidly-changing San Francisco, Fromm reminds us that we walk among the unique locales and quirky characters that endure everywhere, one need only look around.

From a technical standpoint, Fromm accomplishes this by placing the people who populate the canvases in the foreground of her paintings, as well as in the distance. In doing so, she projects perspective in a way that brings the work toward the viewer, placing her audience in the center of the action. One gets the sensation of standing still to survey all of what’s around, with an almost dream-like innocence or fresh-eyed appreciation. This is most readily accomplished in the larger works where the viewer is proportional to the characters Fromm renders.

Reinforcing this, Fromm utilizes flat color and a relatively limited color palette. She paints in acrylic and builds up the surface with repeated coats of paint to create an opaque surface that mutes the vibrant colors and offers a vintage or aged look. With restrained, yet bold, graphic line work, she captures the facial expressions and the posture and gait of people wandering about the modern city. The angst, the preoccupations, the contentment are all there. Because she makes this look so easy, the viewer can mistakenly take away that the works are easy to paint. This illusion is a strength and speaks to her command of the brush and her eye for composition. The line work is reduced to essential necessities. For example, a hooked line suffices for an Adam’s apple and a broad one connotes eyebrows, with the suggestion of brooding and anxiety. 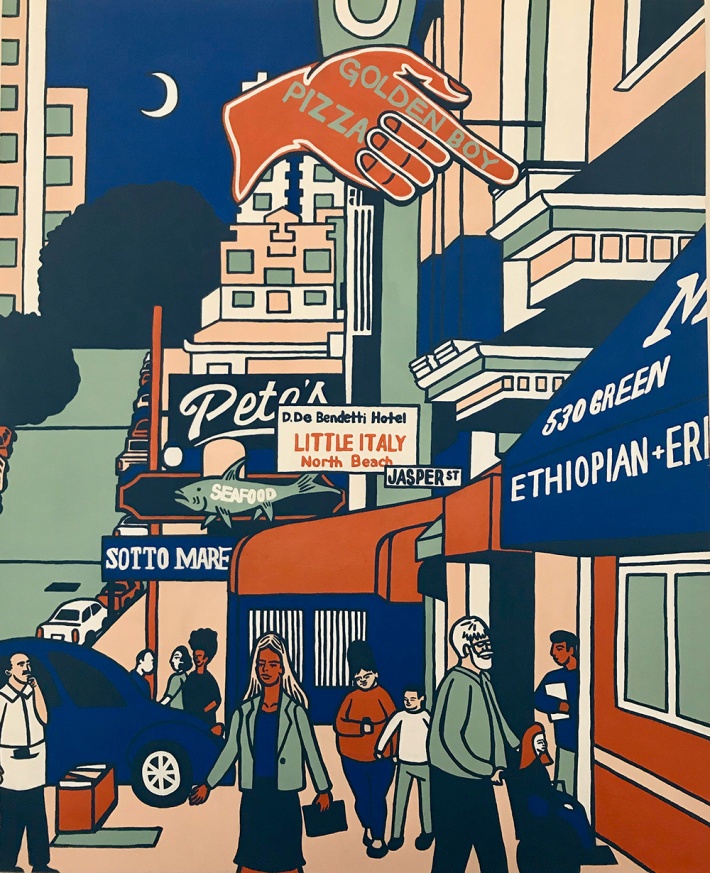 As an artist working in San Francisco, Fromm is keenly aware that the city is undergoing a seismic shift. Capturing places that seem destined to displacement and/or disappearance gives a sense of impending nostalgia. Fromm makes places that still exist seem as if they are already gone. The viewer can read with a sense of loss or a quickened intent to save what’s worth treasuring. Fromm isn’t lingering to paint a complaint, she’s painting a devotion, one deftly attuned to the power of familiar architecture to spark personal connections.

Nostalgia is evoked by rendering scenes of general, if not literal, familiarity. She captures the corner liquor store, the cheap motel, the donut shop, neighborhood movie theater, cafes, taco trucks, bakeries, and other places we collectively know and share. Lettering on billboards and storefront signs abounds. Walking amidst buildings in real life we often don’t appreciate the excess, yet standing before these paintings one feels as if Fromm’s characters are wading through an alphabet soup of advertising.

Fromm is an artist of what the ancient Greeks called the Polis, which didn’t just denote the city itself but encapsulated the idea of the body of citizens. In Fromm’s canvases, the people roam about their modern habitat. Alone and yet also as a collective, these personalities walk alongside one another, enveloped in their own thoughts. Their gestures, their posture, even the way they hold a plastic bag or put their hands in their pockets, are rendered in seemingly simple terms. The thoughts and attitudes they suggest are nonetheless complex. A viewer can infer so much. This conjures a sensation of sonder: “the realization that each random passerby is living a life as vivid and complex as one’s own—populated with their own ambitions, friends, routines, worries and inherited craziness.”

Looking at Fromm’s paintings, the key takeaway is a love for this city. It’s so easy to be cynical and complain about a place not being the same. She looks for the pulse of the place and makes it beat brightly in the here and now. If art can change the way we see the everyday, then Fromm succeeds. She nudges us gently to stop complaining, and start acknowledging the wonders that remain. Perhaps she even inspires the activism that will retain what we have before too much is lost.

The 111 Minna show includes several paintings, which Fromm made as part of a public art project under the direction of the San Francisco Arts Commission. This public work will be installed at the San Francisco International Airport in early 2020. The plan is to have these paintings adapted into tiles and placed as a large-scale wall-mounted mosaic.

The show also includes paintings that center around an imaginary character named “Barry”. Painted exclusively on found materials collected from San Francisco’s Sunset and Ocean Beach neighborhoods, the paintings are rendered on discarded wood, including broken furniture and abandoned fencing.