TRANSCRIPT — You know, it’s been very touching for us to see the accolades pouring in for Jeff — the protector of the poor, the champion of social justice. At a vigil in front of our office last week, I said, “in the 28 years that I knew Jeff, I never saw him run away from injustice, rather, he ran towards it. It was something that he wanted to combat.” The principles he had were forged in Sacramento, where he grew up, in the Japanese community, and in the memory that his family suffered the injustice of internment during World War II.

To understand Jeff, you have to understand that he was a storyteller. Not just a storyteller about his trials, though. He wanted to tell the story of what public defenders do. And there is a very romantic notion of what public defenders do, that we represent innocent, poor people who can’t afford an attorney. And, yes, that’s part of it. But there was another part of it.

Jeff handled the hard cases in our office. I’m talking about cases where he represented people who have caused serious injury, even the loss of life. Whether intentionally, whether the result of recklessness, or when the accused is simply in close proximity to a chain of events that results in that harm. Cases where people say or ask, “how could you represent those people?”

The answer to this question, Jeff believed, in order to really get to it, you had to understand context. You had to think about the lack of opportunity the accused might have experienced, maybe the violence in their neighborhoods, the substance abuse there, the adversity, the trauma that they had to contend with, whatever it might be. And if you did that analysis, you realized that your opinion would start to shift.

Over the years, I have seen many times the power of the state get harnessed to put somebody into prison for a lengthy sentence. The unlimited resources that are available, whether it be the police, whether it be the judges, whether it be the prosecutors. All doing their job, yes. But that is an awesome thing to stand up against. But Jeff would ask, “where was society when that young person needed help? Where were they when that young kid, you know, didn’t have lunch money, or the family was breaking up, or the educational and job opportunities weren’t there? When there wasn’t money for a young person to even go see a movie at the theatre?” And Jeff was about exposing that hypocrisy. Now if you do that, your ability to judge someone changes, because you and I bare responsibility as we live our lives of comfort. And it’s all about our collective failure to protect the vulnerable — the victims and the accused.

Now, of course, you always hear about the cases where people lift themselves up from their bootstraps and are able to make it. But Jeff believed those stories got told precisely because they were the exception.

How did Jeff come to understand this? The public defenders in this room know what I’m talking about. You go to jail to meet someone charged with a crime. You physically touch them, you sit down in close proximity, you breathe the same air, you look at each other’s eyes and you try to reach understanding, you try to get to a point of empathy. And during that process, there’s a bond of intimacy that is created, that is real.

Meanwhile, it’s often the case that society relegates the accused to the trash. They think someone has forfeited their humanity because of their crimes or the proximity to them. Most people want to measure the accused at their worst moment, but Jeff wanted to measure people by their potential. Now if the criminal justice system could be fixed by repairing past damage, it would be easy to work in it. We would all sign up for it because we would want to do everything we could to make victims whole and reverse whatever harm had been committed. But Jeff believed that having empathy for the accused did not betray victims, for whom we also must grieve for.

When Jeff walked in a courtroom and proudly ignored the sentiments that his client didn’t deserve to have an attorney paid for by the state or the calls to send someone to prison for life, Jeff was proud because he was representing a human being, not for what they did or might have done, but because they were a human being and deserved dignity and a meaningful life. When he walked into court with someone reviled in the press or perhaps in the public space, he didn’t judge their conduct. He didn’t condone their conduct either. But he walked into that court, because he was as certain as his opponents were not, that the system needed to change. Jeff believed this to his core.

Jeff’s enemies think they are on the higher moral ground. But he was trying to make the world a more just and egalitarian place, where acknowledging mistakes don’t define someone’s worth or their capacity for redemption. For this work, Jeff was reviled by some, but he inspired many others. And on behalf of all of the public defenders here, from the past to the present – we have our former public defender Jeff Brown and the chief attorney Peter Keane – I extend to you Mutsuko and Lauren, my most sincere condolences. And to Sam and Gladys and to Stan, of course, and to the Adachi and Sata families. Jeff was a beautiful man, who after a life of so much action, deserves to rest in peace. Thank you. 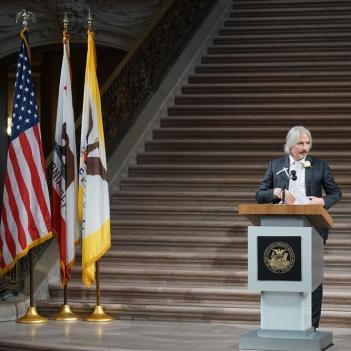 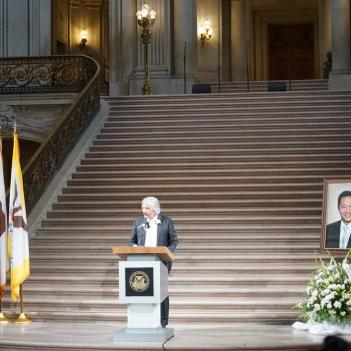 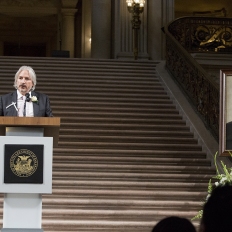 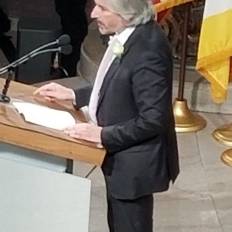 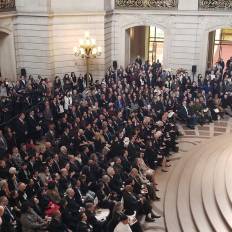