GUNS IN OUR SOCIETY 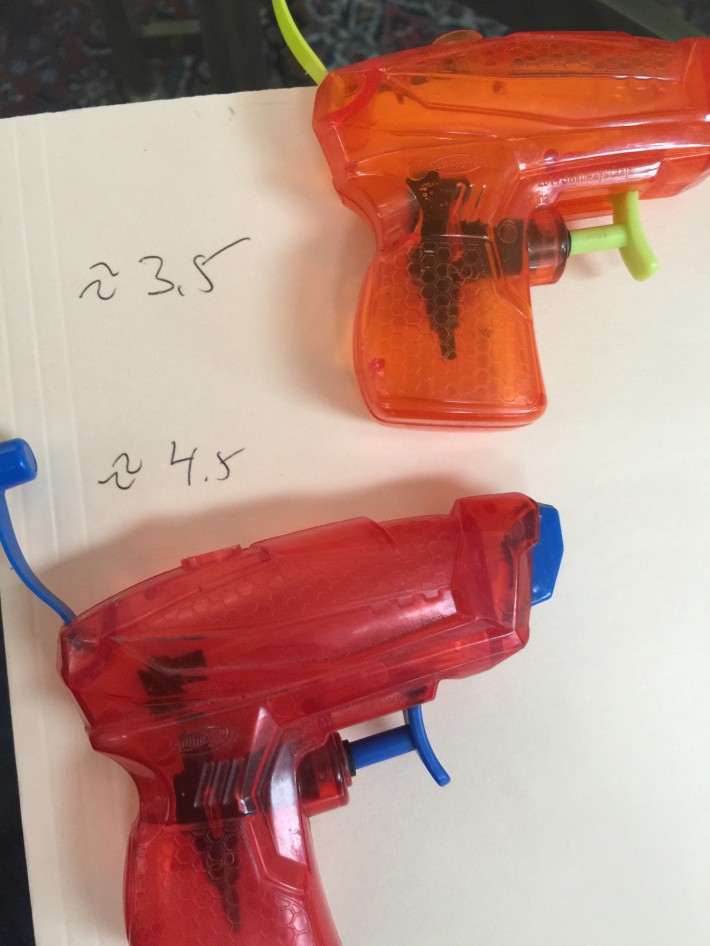 The trigger pull on children’s squirt guns (aka toy water pistols) being tested, 2017.

Four and ½ years ago San Francisco became the site of a legal case that garnered national attention. Some say that it helped elect a U.S. President, which if true means that it is partially responsible for why Neil Gorsuch and Brett Kavanaugh are on the Supreme Court, and why the U.S.’s relationship with NATO is so strained, to name but three things to help put the seriousness of the matter in perspective.

In the Summer of 2015, Kate Steinle died after being struck by a bullet on Pier 14 in San Francisco. The man accused of her death, Jose Ines Garcia Zarate, is an undocumented Mexican immigrant, who has been deported on five occassions.

Donald Trump, then-candidate for the presidency, capitalized on the case to reignite a campaign, which he had launched two weeks earlier, and which was already floundering. He had kicked-off his campaign by denigrating Mexican immigrants, causing many businesses and organizations (including NASCAR, Univision, NBC, and Macy’s) to disassociate from his brand. After Steinle’s death, Trump claimed vindication and attacked his rivals for being soft on immigration and in the process making the issue his signature one.

Although there was a media frenzy to unravel who Garcia Zarate was and what had happened on Pier 14 when Steinle was shot, no one managed to reframe the debate as less about immigration and actually more about guns.

Guns are ubiquitous in the United States

The United States has more guns than it does people. A lot more. According to the Graduate Institute of International and Development Studies in Geneva, Switzerland, “There are more than 393 million civilian-owned firearms in the United States, or enough for every man, woman and child to own one and still have 67 million guns left over.”[fn1]

As a result, should we be surprised when a stolen gun turns up in a public place? Even a seemingly peculiar place, like under a seat on a tourist pier (where Garcia Zarate said he picked up an object wrapped in cloth, and unwittingly fired the bullet that killed Steinle)? Simple Google searches confirm various locations where guns are routinely found, including parks, public bathrooms, under parked cars, even in trees. One reason for this is that there are many reported instances of burglars hastily disposing of guns after thefts.

In one emblematic story, just this month in Monterey Park, California, police found a gun outside of an elementary school, later determining that the “gun had been stolen from a house during a burglary earlier in the day and was dropped by the suspect during his getaway.”[fn2]

Accidental discharges happen all the time in the U.S.

Accidental shootings (where a gun is fired unintentionally) happen 4 or 5 times a day, with at least one death resulting daily. These statistics are so constant, year to year, that we can predict with certainty the frequency of these accidents.[fn3]

When someone gets shot in a negligent discharge, it should not be a surprise. We knew it was going to happen. How could it not? It’s literally the price we pay for having so many guns. That’s because there is a statistically significant association between gun availability and unintentional firearm deaths. To emphasize this point “A 2001 study found that regardless of age, people are nine times more likely to die from unintentional firearm injuries when they live in states with more guns, relative to states with fewer guns.”[fn4]

Curiously, all operable guns, whether with a light or heavy trigger pull, seem to be susceptible to accidental shootings. Rarely is the trigger pull of a gun even cited as the reason why a gun went off. Usually the discussions center around the need for more firearm handling training. But one thing we can be certain of is that if 2 and 3-years-olds are able to do it, then we shouldn’t pretend it’s difficult to cause a gun to fire once it’s in a loaded status.

A routine internet search for 2019 (the first 12 results are below) yields all kinds of anecdotal stories of two, three, and four-year-olds firing guns accidentally:[fn5]

1/23/19 — Norwalk, CA
A 4-year-old boy accidentally shot his mother in the torso after gaining access to an unsecured shotgun left in the backseat of a car.

2/2/19 — Seattle, WA
A 4-year-old boy accidentally shot his 27-year-old pregnant mother in the face after finding a gun under a mattress.

5/26/19 — Brown County, TX
A 3-year-old boy unintentionally shot himself in the head after finding a 9mm handgun in the nightstand of his home.

6/25/19 — Danville, KY
A 2-year-old boy unintentionally shot himself in the foot after discovering a family member’s handgun tucked underneath a pillow.

9/6/19 — Cahokia, IL
A 4-year-old girl unintentionally shot and injured herself after finding a loaded handgun in her home.

10/8/19 — Sedalia, KY
A 2-year-old shot himself after finding a holstered handgun and discharging the weapon.

10/17/19 — Indianapolis, IN
A 2-year-old fatally shot himself after finding his mother’s unsecured firearm.

In Garcia Zarate’s case, the gun which fired the fatal bullet was tested by experts and the trigger action was found to be lighter than many commonly available children’s squirt guns (aka toy water pistols). Additionally, the length you have to pull the trigger to activate it was only ⅛ of an inch. That means pulling the trigger back slightly (much less than an inch) would result in a bullet being fired. The gun Garcia Zarate accidentally fired also didn’t have a safety. It was manufactured that way to be easier to shoot.

Next month, Garcia Zarate will return to federal court to face yet more gun possession charges, for the same offense he was tried for in state court in 2017. Then-attorney general Jeff Sessions responded to the San Francisco jury’s “not guilty” verdicts in the murder charges, by announcing Garcia Zarate would face federal charges for “illegal reentry” to the United States. But when federal authorities were reminded Garcia Zarate had been released into San Francisco by local law enforcement officials, they realized he couldn’t be charged with that. Ultimately, they indicted him for gun possession, for the few moments on Pier 14, in which he apparently held an object that unbeknownst to him was a gun (the federal statute being slightly different than the state offense).

Garcia Zarate’s fleeting possession of a firearm will be the central issue of his federal trial. In technical, legal language we call such a brief handling, momentary possession. The facts in Garcia Zarate’s case, based on what was presented in the state trial, are that he picked up a pistol, which was wrapped in cloth, without knowing what it was. He was so startled when it fired, as he was unwrapping it, that he instinctively threw it over his shoulder (since the pier is a narrow pedestrian walkway, Garcia Zarate actually tossed the gun into the bay). In all, he held the firearm for less than 5 seconds.

Imagine, hypothetically, if someone handed you a closed envelope containing some kind of contraband. You take it without knowing what it contains, then open to look at what is inside. Once you realize it’s something illegal, you immediately place it down or return it. Have you committed a crime? Were you in possession of contraband, worthy of a criminal conviction, even for a brief moment? A federal jury will have to rely on common sense as they sort out these details.

We can all agree that Kate Steinle’s death was awful. But anyone on the pier that day, whether a Mexican immigrant, a visiting tourist, a worker from the Department of Public Works cleaning the pier, or even a small child, could have found that gun and handled it in a way that accidentally caused it to fire a bullet. Let’s not keep compounding this tragedy just because we want to blame someone. If we must, let’s denounce the laws that make it so easy to purchase a firearm in this country. None of us are safe from accidental shootings when there are 393 million guns out there.

Kate Steinle died because we live in a society where guns are everywhere, not because an undocumented immigrant, with no history of violence, meant her any harm. He didn’t, as a state court jury determined after hearing weeks of eyewitness and expert testimony.

Had media and political scrutiny focused on this case being about the availability of guns in our society, instead of illegal immigration, would Trump had been able to manipulate the case as he did and win the presidency? Who benefits when we allow the narrative of a tragedy to be written by someone who has the most to gain from its exploitation? What does society lose in the process? 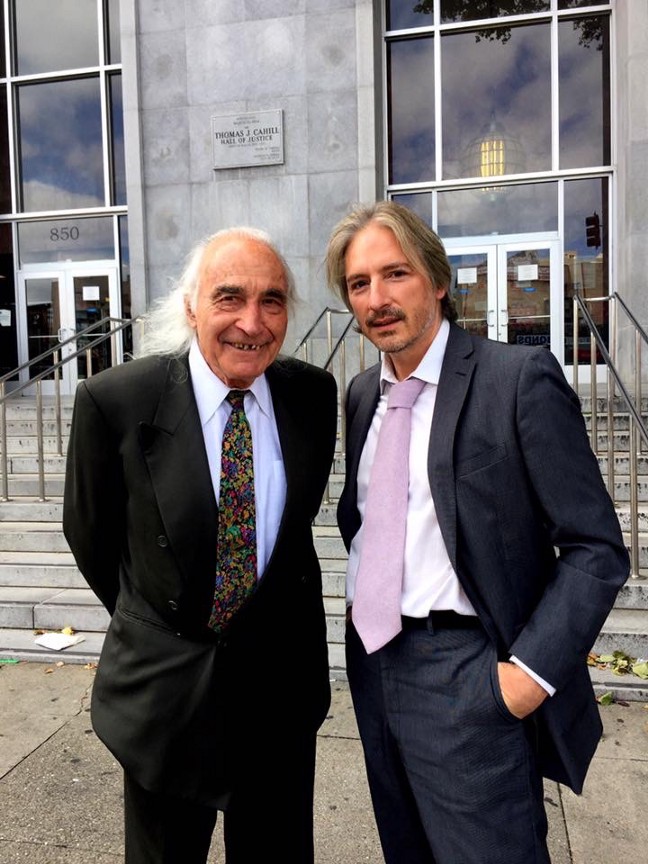